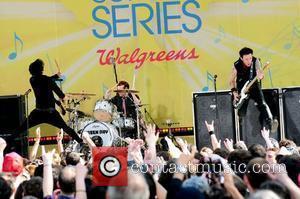 Punk rockers Green Day have triumphed over Eminem in the European albums chart - 21ST CENTURY BREAKDOWN has beaten RELAPSE to the top of the countdown.
The band's latest release debuted behind Depeche Mode last week (ends22May09), but they have climbed to pole position and robbed Eminem of European glory.
The rapper's Relapse is a new entry at two, while Depeche Mode's Sounds of the Universe falls to three.
Meanwhile, Lady GaGa continues to reign over the continent's singles chart - Poker Face is the number one song for a 14th week.
The Black Eyed Peas' Boom Boom Pow sits in second position, while Alexander Rybak's Fairytale leaps up the chart from 52 to three.