Few bands reach 30 years in the business and fewer still produce output that keeps them from becoming a heritage act, but Green Day have managed just this.  2004's 'American Idiot' reignited their popularity, but 2012's triple-album onslaught was overshadowed by a personal problems and rehabilitation.  The band's popularity remains intact though, with a recent set of UK headline shows selling out almost instantly. 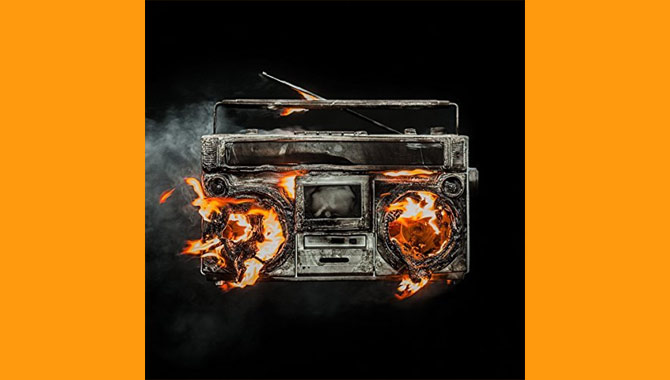 Whilst they may be leaders in the punk-rock genre, Green Day's most popular moment arguably remains the melodic 'Good Riddance (Time Of Your Life)'.  With this in mind, the gentle opening to 'Somewhere Now' shouldn't be so surprising, though the band open up before long.  'Bang Bang', offering a critique of gun culture in the age of social media, proves nearly as thrilling as 'American Idiot' while the title track of the record also blasts along forcefully.  In contrast, the plodding 'Say Goodbye' loses momentum, but the power-balladry of 'Outlaws' proves a solid if unspectacular turn.

Whereas many records will cram the middle running with filler tracks, here it contains three of the more enjoyable moments.  'Bouncing Off The Wall' has suitably crashing power chords, while the survivalist content of 'Still Breathing' makes for a radio-friendly anthem that was an obvious choice as a single.  Similarly energetic is 'Youngblood', a simple and infectious cut, while 'Forever Now' shows they still have the ambition to be progressive, though it is no 'Jesus Of Suburbia'.  For many bands a record of this standard would be a career peak; Green Day have done better, but this stands as a fine release.