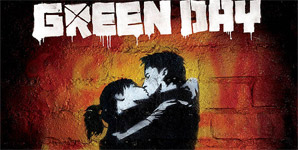 Having decided that concept is the future, Green Day attempt punk-prog in a concept about a couple, Christian and Gloria who live through good ol' GW's two presidential terms. Beyond all the concept BS is a rather bloated 70 minute album packed with the types of song Green Day are happy to write now- that is to say, songs two minutes too long and written to be 'epic'. Thing is, I completely understand why they want to release this- they want to write these great, transcendent songs, but I just can't see it from this band. People keep calling this a masterpiece, but I think the band have hit a bit wide of the mark.

The album is split up into three 'acts' of 7, 6 and 5 songs respectively and for the most part it's, well, long Green Day songs with piano in sometimes, and the occasional progressive sounding time change. Billie Joe and the other two chaps play along with lines like 'eternal youth is the landscape of a lie', and, here they're talking ostensibly about the media, but there's shades here of the band feeling old and tired. And here, I think, is where their main problem lies. It just doesn't have the power of records of similar theme- a comparison can be made to the nigh-perfect Gatsby's American Dream self-titled, which dealt wonderfully with these problems a successful band has. The GAD record was an angry, focussed and powerful blast against the men making them tour, making them perform day after day and the cynicism this brought out in the band. If Green Day really wanted to produce an empowering record, they'd have done well to look at the example above instead of another concept album.

That's not to say that there aren't some great moments here. Christian's Inferno starts well but is ruined by the production - Billie Joe is buried deep in the mix here and as a result there's no power. The songs are just too glossy for Green Day to be complaining about authority and it feels more than a little contrived. The record is at it's best when they properly slow it down or properly speed it up, Last Night On Earth is a good example of a slow one done right (if a little hackneyed), Peacemaker is a quick but mainly acoustic song done right and Murder City is wonderful. I also like how there's recurring themes throughout- the opening section of the title track is reflected and expanded upon in the last song. This is the only thing about the concept that I like.

So the songs are pretty well written, but it's annoying to hear how a band should have written about what actually is bothering them now, as opposed to a poorly directed rant against vague authority figures. The album has debuted at #1 pretty much everywhere and has been certified gold or platinum in various territories already, but it won't last: it's a record that will lie forgotten in a few spins time.