Grandaddy's Jason Lytle has made you a mix tape. Here is the video to the new single "Nature Anthem" from the album "Below The Radio"

He hand-picked some lesser known tracks by Beck, Snow Patrol, Pavement and more. He wove them into a unique collage. He even made you an exclusive new Grandaddy track, and called it "Nature Anthem."

Always left of center and ahead of the curve of contemporary music, Grandaddy is responsible for some of this century's most memorable releases. 2003's Sumday and 2000's The Sophtware Slump are internationally recognized masterpieces, and at the helm of each one is Modesto, CA's Jason Lytle.

Appropriate, then, that such a special mix come from the mastermind behind a beloved band like Grandaddy. Their reputation as musical innovators springboards a compilation like Below the Radio. Given the fact that Grandaddy is universally recognized among the media and their fans for bringing excitingly talented bands with them on tour - from the likes of Earlimart and Elbow to Snow Patrol and Super Furry Animals -the concept of a Grandaddy-related compilation album makes perfect sense. Additionally, the juxtaposition of well-known artists like Beck, Blonde Redhead and Pavement with much lauded artists like Snow Patrol, Fruit Bats and the Handsome Family makes for an anticipated release to all fans of good music.

The first of a new venture for Ultra Records and 3 Artist Management, Grandaddy's Below the Radio excavates the underground for you, with one of American music's brightest talents as your guide. 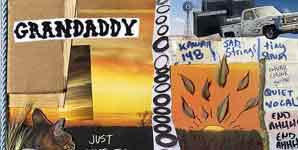