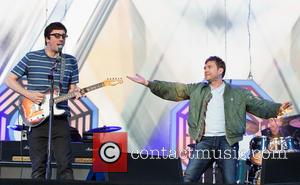 The rapper riled some music fans earlier this year (15) when he was booked to headline Britain's iconic Glastonbury festival, and more than 135,000 signed a petition urging bosses to drop him from the traditionally rock line-up.

British rocker Coxon has now weighed in on the debate over West, who also faced fierce opposition to his headline set at the Pan American Games closing ceremony on Sunday night (26Jul15), and he declared the rapper's music has little value.

Coxon tells Britain's The Guardian newspaper, "He's a f**king idiot, isn't he? Does he even make his own albums?... People aren't interested in learning instruments and putting effort and time into it. They want it immediately. It's MCDonalds, isn't it? It's convenient. But all I hear is a loop starting, some bloke starts to sing or rap, and the loop finishes. There's no shape to this stuff. And the lyrics just seem to be idiotic."