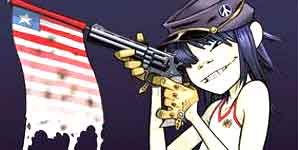 Dirty Harry, the new single from two-dimensional superstars Gorillaz, will be released by Parlophone on 21st November.

Dirty Harry is the third single to be released from the multi-million selling Demon Days, and follows on from the huge success of Feel Good Inc. and number 1 single DARE. It's a lively, low-slung track retrofitted with electro flourishes and featuring an explosive stream of consciousness rap from guest performer Bootie Brown of the Pharcyde.

The video is another groundbreaking Gorillaz production which sees the entire band, plus Bootie Brown and the San Fernandez Youth Chorus, relocated to the desert around Swakopmund, Namibia. Directors Jamie Hewlett and Pete Candeland, along with animation director Heath Kenny, have once again produced the perfect visual complement for the music; a startling mixture of live action with CG and 2D animation that follows the band's attempt to rescue the children's choir from the unforgiving south-west African desert.

This is the first Gorillaz video to be shot on location, and features an armoured personnel carrier borrowed from the Namibian military, plus an authentic WW2 uniform modelled by Bootie Brown, who found himself buried in the sand for take after take... and didn't complain once.

Bsides include new tracks Hongkongaton and Murdoc Is God, plus an exclusive live performance of album track All Alone and the Chopper remix of Dirty Harry.

Formats are as follows:

Gorillaz have picked up an astonishing five nominations at the MTV Europe Awards, including Best Group and Best Song. Winners will be announced at the ceremony in Lisbon on 3rd November.

Demon Days will get its first live outing at Manchester International Festival from the 1-5 November. The animated band will take a backseat as the album's guest musicians are brought together to recreate Demon Days from start to finish over five remarkable and unrepeatable performances at Manchester Opera House - for more details see www.manchesterinternationalfestival.com