Review of Stylo Single by Gorillaz

I'm not saying the world is about to end (maybe it is) but there's something a tad apocalyptic about new Gorillaz single Stylo. With its Terminator 2 Judgement Day leanings, it springs to life with a dirty electro beat that signals a more than welcome return for hip hops most illustrated.

Mos Defs muffled lyrics are charming enough, especially when followed by Damon Albarns bittersweet serenading, but it's not until the great Bobby Womack swoops in to steal both artists thunder in one howling move that we get to see the tracks true intentions.

Huge slabs of Pet Shop Boys electro coupled with 70s funk shouldn't really gel at all, and to some extent they don't, but there remains a charm to this disjointed array of sounds that makes it a fascinating listen all the same. Daman Albarns claims that forthcoming album Plastic Beach is the most popish thing he's ever written are not exactly proven right by this effort, but what is proven is his ability to pull off just about anything he tries his hand at. 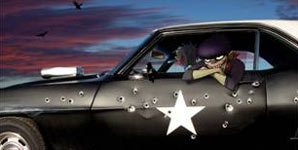