In the ensuing 5 years since their last triumphant release, 'Demon Days', the world's biggest virtual band have been busying themselves building their very own Tracy Island. No doubt watching various re-runs of John, Janet, Valerie, Connie & Shep has helped them with their creation. Made out of rubbish and debris, and located at Point Nemo in the South Pacific, the furthest distance from land, 'Plastic Beach' has served as the studio where its namesake album has been magnificently recorded.

Whilst they were atop the land fill scavenging, the masterful creator was indulging his ever broader spectrum of creativity. Lovingly and painstakingly crafting his celebrated Opera, 'Monkey: Journey To The West'. Putting together another band, in the form of The Good The Bad And The Queen to present his London based concept album and ....., in no small measure, successfully reuniting his old band Blur to a tumultuous reception. His appetite and artistic endeavour still not satisfied the musician, helped some say less than eagerly by his animator and co-creator Jamie ('I'm so f**king bored of drawing those characters') Hewitt, turned once again to the virtual world to help feed his insatiable desire. 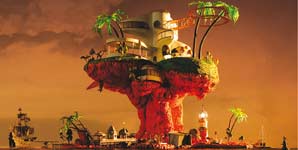 Flicking through his mamouth Rolodex, and giving random a whole new meaning, Mr Albarn has been able to assemble a plethora of global talent. In from the cold, languishing in obscurity, coerced (Murdoc Niccalls says 'Via Chloroform and Rohypnol') from reclusiveness or just deserving of inclusion, artists from Mick Jones to Mos Def have astutely contributed to the third instalment in Gorillaz stunning 12 year history. The cast list reads like a fantasy festival roster, Scroobius Pip commented recently that you only usually get this sort of line up for charity, but that 'It's (Plastic Beach) allowed to be good'.

The album itself indulges Damon's meanderings across the musical globe to fuse together genres, deconstruct accepted musical practices and expertly remix your sonic perceptions. Meanwhile the underlying message of waste, global deterioration and wilful destruction are subjects that bubble along throughout Plastic Beach but do not hamper your enjoyment of it. This is no sermon, merely a somewhat dejected commentary on life.

After easing us in gently with an orchestral introduction from Sinfonia ViVa, the O.G himself Mr Snoop Dogg, 'drinkin' lemonade in the shade' takes the vocal reins with the smooth funk laden jazz slices of the Hypnotic Brass Ensemble as accompaniment. A taste of Asia initially beckons with the arrival of the rather contrived, but oddly quaint, 'White Flag', a dueted rap to strings, featuring Kano, Bashy and the National Orchestra For Arabic Music. 'Rhinestone Eyes' is more familiar Gorillaz territory, laid back beats, synth pop and a lazy melancholy vocal. Bobby Womack and Mos Def are up next to make the recent single 'Stylo' their own, a tour de force of soulful tones belt out among the electronic marvelry. Gruff Rhys sits aside De La Soul (A surviving collaborator from Demon Days) on 'Superfast Jellyfish', a full length advert/infomercial. It's a mad, tripped out journey into the surreal, like the Truman Show on acid. On 'Empire Ants', Damon, doing an ever more 'Heathen' era Bowie impression (Here and on 'Broken'), sings a beautiful lament juxtaposed with ZTT/Propaganda style electro that also features Little Dragon.

Halfway in and the utterly fantastic, very British folly, 'Glitter Freeze', fizzes along magnificently with Mark E Smith doing a superb comic villain vocal, complete with menacing cackle. ('Where's North from 'ere?'). Dr Who meets glam synth pop culminating gloriously to make a hybrid 2010 Gorillaz romp in the vein of Rock N Roll pt:1. Nearly as interesting, 'Some Kind Of Nature', uses the inimitable vocalisations of Lou Reed, coupled with Albarn's, to produce a perfect piece of quirky pop. The title track has also found the Gorillaz phenomenon capable of reuniting Mick Jones and Paul Simonon for the first time together since their Clash days, a very welcome and long overdue occurrence. Tripping along to a mesmeric loop 'Plastic Beach' is another tune waiting to get trapped on repeat in your head. Closing with spectacular originality is 'Pirate Jet'. Marilyn Manson's 'Dope Show' meets The Plinky Plonk from In The Night Garden with extra instrumentation from random offset ice-cream van chimes. Genius.

Plastic Beach is further testament, if any were needed, that the Gorillaz cyber platform allows particularly creative fields to be ploughed by its ground breaking protagonists. Nifty production, natty riffs, oh so catchy tunes and a true collaborative and artistic delight is what the Gorillaz have pulled off...................again.