The chef laughs off negative comments regarding how his daughters dress.

Gordon Ramsay has received his fair share of criticism in his time as a celebrity chef, and while he can normally turn a blind eye to negative comments, he's outspoken enough when the criticism concerns his children. Now he's spoken out to shame trolls who responded inappropriately to an Instagram photo of his teenage daughters. 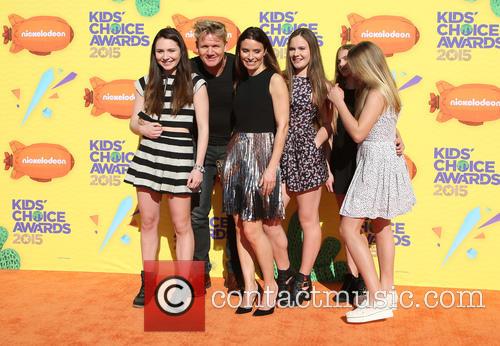 Gordon Ramsay attended the celebrations with his wife and children

Surprisingly, he managed to keep a lid on the bad language when responding to the negative remarks, which suggested that the girls' skirts were too short and that they were dressing well beyond their years. 14-year-old Matilda, 17-year-old Megan and 16-year-old Holly all wore girly party outfits as they posed in a picture at Heddon Street Kitchen where they were celebrating the birthday of twins Holly and Jack.

'Just read the tweet via mail re your daughters dresses! Why would anyone comment on teenage girls dresses?!' Said one woman, to whom Ramsay responded with, 'Sick minded people Claire, my job is to teach my son how to respect girls.'

He wasn't taking the negativity seriously though, brushing it off with: 'Like they have any right to suggest what our daughters  wear... hilarious. What next...'

Ramsay's children have proved themselves to have a maturity beyond their years, however, with Matilda even following in the footsteps of her food-loving father by launching her own cooking show on CBBC entitled 'Matilda & the Ramsay Bunch'.

As for Ramsay himself, a 15th season of his US cooking competition 'Hell's Kitchen' will hit in January 2016, soon to be followed by season 3 of 'Hotel Hell'.