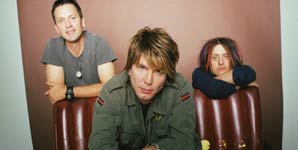 The Goo Goo Dolls
Stay With You
Video Stream

The Goo Goo Dolls highly anticipated, long awaited new Glen Ballard-produced album, Let Love In, is finally in stores. Moreover, the Goo Goo Dolls are slated to kick off a national summer tour on June 21st in Ridgefield, WA, to be joined by the Counting Crows on most stops.

Since forming in 1986, the Goo Goo Dolls have evolved from a scrappy punk-influenced trio into the platinum-selling, chart-topping act behind such radio staples as "Name," "Iris," "Slide," and "Here is Gone." Along the way, founding members John Rzeznik and Robby Takac left Buffalo, N.Y. for Los Angeles, but Rzeznik soon found that L.A. isn't everything it's cracked up to be.

Writing the songs for Let Love In, Rzeznik found inspiration in his hometown. "When you drive down the street and you see the park and the bleachers where you first a kissed a girl, you drive past the house you grew up in, you see the post office where your father worked, you drive through a neighborhood that used to be all factories and now it's just leveled, or you drive by a street and see a beautiful little shop that just opened and how people are really thriving there," he says. "It gives you a lot of hope and perspective."

That feeling, hope, and perspective informs Let Love In. "That whole experience kind of opened up my heart," Rzeznik says of the Buffalo sessions. "It was good to feel again. I don't need to feel good all the time. I just want to be able to feel."

The Goo Goo Dolls, Stay With...