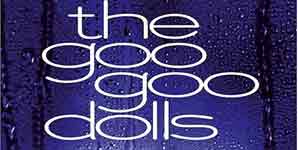 Such is the demand to see 'the Goos' that even the touts outside the venue have run out of tickets – and what's more astounding is that this is the first time the band have visited the city. The trio who were rocketed to stardom by an appearance on the "City Of Angels" soundtrack, recently released their eighth album "Let Love In".

To deafening cheers, an expanded stage line up takes the stage and launches into a flawless rendition of new track "Stay With You". The fantastic "Slide" is the first of many highlights in a set that mixes the band's latest tracks with their classic moments. In a similar vein to Thierry Henry on a football pitch, the band are confident of their ability without being smug, no more so than main singer John Rzeznik who effortlessly works the crowd – but he is also an impressive live vocalist. This is demonstrated on the likes of "Better Days", and the emotive ballad "Become".

Deserving of a mention as another standout moment is "Big Machine", which has the audience bouncing to the ceiling, but it is of course "Iris" that everyone present wishes to hear. Indeed, there are even some in attendance who aren't familiar with the Goos' other songs, but that is testament to just how wonderful the track is, and the band avoid being predictable by playing it mid-set. A sea of glowing mobile phones are raised to record and transmit it in all its glory, and Rzeznik is easily out-sung by his fans in an amazing moment to behold. The only disappointment to the evening is that the band are on stage for little more than an hour, but it's a minor gripe when they've put on an immensely enjoyable performance.