A cruise with Goldie Hawn and her daughter Kate Hudson aboard super yacht Silver Angel -fetched £140,000 at an auction for the Novak Djokovic Foundation on Monday night (08.07.13). 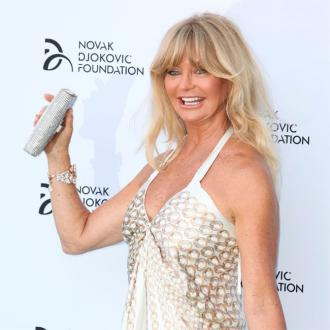 A cruise with Goldie Hawn and her daughter Kate Hudson fetched £140,000 at an auction for the Novak Djokovic Foundation on Monday night (08.07.13).

The four-day vacation aboard super yacht Silver Angel - which has a staff of 22 - with the 'Overboard' star and her actress daughter was snapped up jointly by three couples, including TV presenter Jonathan Ross and his wife Jane Goldman, for the huge sum.

The item was part of an auction at the inaugural tennis-themed dinner held at The Roundhouse venue in London to raise money for the tennis player's new charity - which aims to help disadvantaged children across the world but especially in Djokovic's native Serbia.

A number of items were sold for high prices during the evening, including a week-long vacation at the luxurious Gili Lankanfushi resort in the Maldives in an over-water villa which was snapped up by Gerard Butler for £25,000.

Over £1.14 million was raised in total, and at one during the dinner Goldie and Kate played former Wimbledon winner Boris Becker at tennis.

Goldie's own Hawn Foundation has partnered with The Novak Djokovic Foundation to continue the work her MindUpProgramme has started in Serbia to help kids and she is very proud of their association.

Speaking before the event started, the 67-year-old actress told BANG Showbiz: ''I'm very excited to partnering Novak's foundation. Our programmes' aim is to help children to gain confidence, to experience happiness, provide them with optimism and get them ready for the world. There are many ways to help children, and that's what our programme does. It's a great feeling to be able to do it and that's why I'm here.''

Other guests included Sarah Ferguson, The Duchess of York - who was recently announced as the charity's Global Ambassador - her daughters Princess Beatrice and Princess Eugenie, Ronnie Wood and Sir Richard Branson.