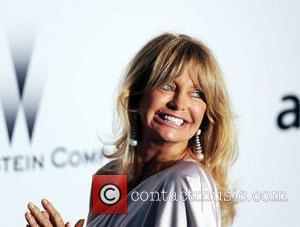 Hollywood actress Goldie Hawn is urging fans to support 50 Cent's mission to feed a million African children for World Food Day after striking up an unlikely friendship with the rapper.
The Private Benjamin star ran into 50 Cent during a lunch date in August (11) and subsequently took to her Twitter.com blog to gush about the In Da Club hitmaker.
She told fans, "Lunch was especially sweet today cause I met 50 Cent. His smile lit up the room."
Now Hawn is encouraging her online followers to back a good cause by directing them to the hip-hop mogul's Facebook.com page for his new Street King energy drink, the proceeds of which are going to benefit the United Nations' efforts to provide meals for hungry kids.
In a post on her Twitter.com page, Hawn writes, "In honor of World Food Day, 50cent wants 2 give 1M (one million) meals to kids. Give a meal 2 (sic) a child in need by liking StreetKing (on Facebook.com)."
World Food Day was acknowledged on Sunday (16Oct11).
Last month (Sep11), 50 Cent revealed to WENN that he is aiming to feed a total of one billion African kids within two-and-a-half years - half the time of his original goal of five years.
He said: "I'm really serious about it (hunger relief). So far I've been able to feed 2.5 million (kids), but I wanna feed a billion. When I said I'd do it in five years, I was being really conservative. I'll do it a lot faster... I said five years because that's (the norm) when I create a business plan, but I think I can do it in half that time."