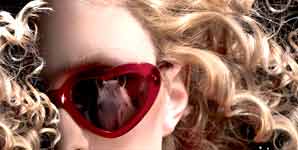 They brought back platform boots, they thrilled us with dancing dogs and now the wonderful Goldfrapp are ready to start 2006 at a gallop with 'Ride A White Horse'. The third single to be taken from their pulsating 'Supernature' album, 'Ride A White Horse' comes out on Mute on February 13th 2006. Described by Q as 'a fabulously sexy strut', 'Ride a White Horse' comes kitted out with a lavish selection of brand new mixes from the likes of Francois K and Ewan Pearson for every kind of dancefloor.

Hot off the back of two Top Ten singles ('Ooh La La' and 'Number 1') 'Ride a White Horse' kicks off what is going to be a hugely busy year for this much loved British band with further singles from Supernature due, touring, festival appearances and a few surprises planned for the rest of 2006.

'Supernature' has already achieved platinum status in the UK (300,000 sales and rising) and has most definitely put the "Ooh La La" back into this year. With all this in just three months, 'Supernature' has also become Goldfrapp's fastest selling album so far.

With the band being name checked several times recently by the likes of Madonna as an inspiration, Will and Alison's unique style has truly arrived. Alison Goldfrapp is also becoming recognized as one of our most treasured artists, having just been chosen as one of British Vogue's 2005 Superwomen as someone who 'has made an outstanding contribution in her chosen field this year…sheer inspiration'.

Following in the footsteps of Franz Ferdinand and the Kaisers, Goldfrapp are currently flying the flag for great British music and are already halfway through a massive Global tour. The Supernature tour hits North America for the first time in December with a sold out show in NYC, coinciding with 'Ooh La La' reaching No 1 in the Billboard US Dance Chart.

With their last UK tour a massive success, both critically and from all the true love and devotion from their fans - Alison and Will were totally overwhelmed by the response. As a result, Goldfrapp have announced further dates for 2006 with extra shows already added due to huge demand in Manchester and London where they are playing three nights at the Brixton Academy.

Tickets are available via www.gigsandtours.com, except Belfast and Dublin www.ticketmaster.ie