It's been three years since Godspeed You! have played in Hong Kong and since then they've recorded their live show favourite known to fans simply as 'Behemoth'.  It's this that makes up the core of their set tonight. 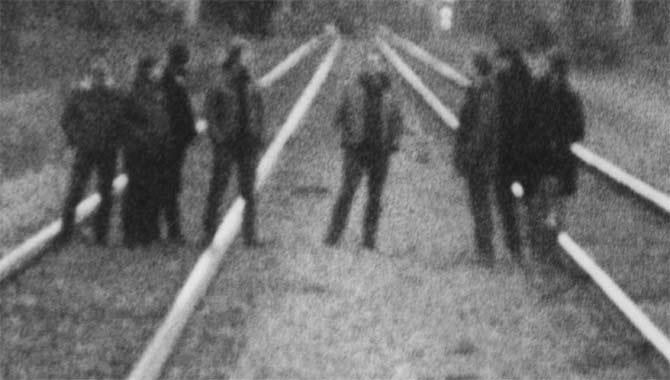 Violinist Sophie Trudeau is just about visible on the black stage, the faint cry of her instrument and Thierry Amar's double bass creating an air of menace as the eight piece slowly take the stage during 'Hope Drones'. It's a fittingly disconcerting start for a band that has always remained on the outside of their scene while at once leading it. Almost at odds with the music was the tape loop flashing the word 'hope' over and over at the audience. It's often easy to forget under the harsh sound that the Canadian noise-masters are in fact a beacon of positivity.

The middle of their set is made up of the four tracks comprising 'Asunder, Sweet and Other Distress'. The film loops used throughout this become as much a part of the songs as the music itself. We get aerial shots of skyscrapers and excerpts from prison files, its' grainy and distorted just like the music and demonstrates that you don't need vocals to be political. The footage of film being burned is hypnotising. The sound is cacophonous and compelling, but is equally so in the quieter moments where melody manages to break through. Godspeed You! Black Emperor are as staunch in their dedication to heaviness as they are to note perfect playing and that's very much the case tonight.

Largely playing music from the past decade Godspeed You! had a thematic sound tonight that was heavy with little respite available and the audience responded in turn by asking for more. As the lights came up it became apparent there was no encore planned, but the sheer will of the people brought them back out to play for another few minutes, like a short sharp kick in the stomach they left again. People stayed until asked to leave, such is the dedication of their fans all around the world.

With not a word said the behemoth that is Godspeed You! Black Emperor step back into the silence that says so much for them.