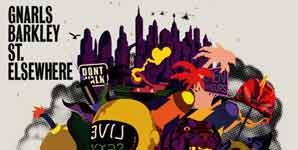 It is easy to see why someone might be interested in this disc, given how catchy the lead single, Crazy, is. But, give thanks to iTunes or other download services that you can download that one track without the rest of the album, as it is an album with more filler than B&Q has on display.

This is the debut album from alt-rap producer Danger Mouse and former Goodie Mob member Cee-Lo. This is supposed to be hip-hop with its tongue firmly in its cheek, but their tongue seems to be firmly stuck out at its audiences. Easy, fatuous knock-off hip hop, with awful drum sounds, weak production and nothing in the way of intelligence to fall back on.

Crazy was clearly a surprise, but it is one that will be massively exploited to con people out of £9 instead of 80p.