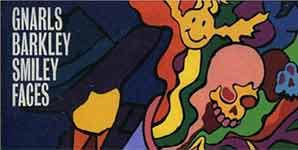 Wet Wet Wet, Bryan Adams, and Tony Blair. What is it that those three have in common? Well, apart from the obvious, it's that they don't know when to quit. Gnarls Barkley, on the other hand, showed us all how it's done by plucking their uber-hit; 'Crazy' from the charts before it could die a horrible Heart FM play list induced death.

But why weren't they content to just sit back and let the royalties roll in? The answer is, so the way was clear for 'Smiley Faces', an explosive slice of skewed nu-Motown, sweeter than a thousand bottles of Sunny D, and much better for your teeth. As well as being a life-affirming stomper of a track, it effectively shows the flip-side of the Barkley character, where 'Crazy' was dark and brooding, and rather unsurprisingly, about having a nervous breakdown, 'Smiley Faces' is blissfully optimistic, but still retaining just enough dark mystery in the ghostly backing vocals to keep it interesting.

To be honest, there aren't any moments that match this on their debut album, St Elsewhere, but there are many that come close, so rather than buying the single, buy the album, it makes for a listen about a squillion times more stimulating than most chart fare, and will stand up in years to come as a truly great record.