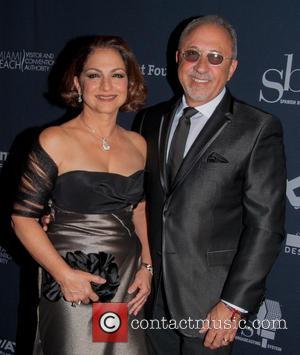 Picture: Photographs of a host of celebrities as they arrived at the Latin Songwriters Hall of Fame Gala (LA MUSA Awards)

Gloria Estefan and Miguel were among the artists feted at the Latin Songwriters Hall of Fame Gala in Florida on Saturday (18Oct14).

The singers each took home trophies at the second annual La Musa Awards, presented by the Latin Songwriters Hall of Fame, which honours Latin songwriters and music champions.

Estefan was one of four composers who were inducted into the Hall of Fame at the gala in Miami Beach, along with Omar Alfanno, Lolita de la Colina and Rafael Perez Botija.

The Get on Your Feet hitmaker was serenaded by Puerto Rican singer Ednita Nazario and later joined by Jon Secada to perform Estefan's emotional track Coming Out of the Dark, which she wrote after the horrific accident that almost left her paralyzed in 1990.

During her acceptance speech, Estefan acknowledged how much singing and songwriting has helped her deal with tough times, saying, "Music has helped me in some of the toughest moments of my life."

R&B singer Miguel was handed the Triunfador (Champion) award for his career achievements over the past few years.

The Adorn crooner, whose father is Mexican American, told the crowd, "I appreciate that you've included me in such a prestigious event. I'll try to do my best to honour the Latin community."