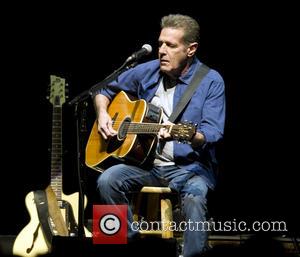 Picture: Glenn Frey - The Eagles performing live on stage, first of two sold out concerts 'History of the Eagles Tour 2014' held at the Ziggo...

Rocker Glenn Frey is adamant the pressure of writing a hit album after Hotel California ripped the Eagles apart, and wishes the band had taken a vacation instead of breaking up.
The group enjoyed a stellar career after forming in 1971, but it was their fifth studio record, Hotel California in 1976, which sealed their legendary status, and it went on to sell a staggering 16 million copies in America alone.
The band only released one more album before splitting in 1980 following an onstage bust-up between Frey and bandmate Don Felder.
Frey puts the tension between the rockers down to the stress of trying to top their biggest-selling album - and he's convinced they would have carried on if they had taken some time off.
He tells Bbc News, "The Eagles were together nine years, and every step of the way we kept getting bigger and bigger and bigger, and then Hotel California came out and kind of blew us wide open. I think we felt a lot of pressure in the years of (follow-up album) The Long Run and the last record we made.
"If I had known what I know now, I would have just had the Eagles have a vacation for a while, we're getting on each other's nerves, that's what the (Rolling) Stones used to do... It's not really ego, it's the pressure to follow Hotel California. Trying to get better every time out, and you just can't be better every time out, every record can't be Hotel California, every song you write can't be Desperado."
The band reunited in 1994, and has only released one more album, 2007's Long Road Out of Eden.