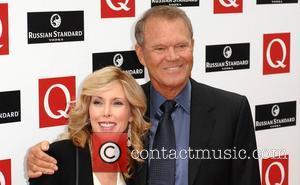 Country legend Glen Campbell is being investigated by an American TV news show after journalists stumbled upon evidence that the singer was given star treatment during his 10-day prison term.

Campbell was recently released from jail in Arizona, where he served time for drink driving, but journalists at scandal show CELEBRITY JUSTICE claim the star was treated too well.

Sources tell the show that Campbell had his own food packed in a cooler, courtesy of his wife, his own cushion or mattress, a cell phone and his guitar with him at all times.

SHERIFF JOE ARPAIO (corr), who has been labelled America's toughest law man, boasted the singer would get, "no special treatment," but Celebrity Justice investigators insist that wasn't the case.

According to JOHN DOUGHERTY, an investigative reporter for the PHOENIX NEW TIMES, the country star's residence was far from the usual dusty and sweaty tents that other inmates are forced to stay in.

Dougherty reveals, "I call it Joe's Country Club Jail. Basically, it was like locking yourself up in a hotel room for the night."

The local reporter also reveals that normal inmates receive none of the same perks: "If you're a regular coming in they'll take away books, toothpaste, you can't bring anything in."

But the local sheriff's department has since insisted they seized Campbell's guitar a day into his stay and he was permitted to keep his cellphone so he could call his lawyer.