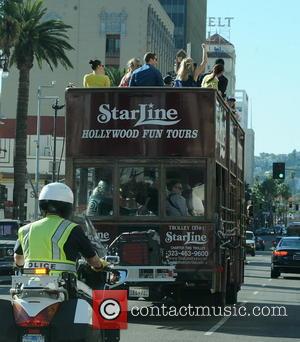 Picture: View - The cast of the hit show "Glee" take a tour of Hollywood in a double decker bus filming their 100th episode - Hollywood,...

The cast of Tv musical Glee remembered their late colleague Cory Monteith on Monday (24Feb14) as they celebrated the show's 100th episode.

The cast, crew and network executives behind the hit Tv series gathered on the show's set in California to mark the occasion.

Dana Walden, chairman of 20th Century Fox Television, gave a moving speech at the event and paid tribute to Monteith, who died of a drug overdose last year (13).

Walden said, "We've celebrated so many milestones on this stage and most recently we celebrated the life of our good friend and colleague, Cory Monteith. I miss Cory a lot today. He was always front and center at an event like this; he really loved them and was always smiling in the front row. He was so proud of this show. He was blown away by the talent that surrounded him - and he had very good reason to be proud."