Quote: "I spent the afternoon before the gig shut in my dressing room on my own, because I only have one pair of white trousers so I couldn't really go out beforehand. I'm going to have to do a bit of shopping. I'm a little prima-donnaish. I wasn't carried but I was helped through the mud. It's a big struggle for everyone on that site." Glasvegas frontman James Allan struggled with the mud at Britain's Glastonbury music festival over the weekend (24-26Jun11).

Quote: "When we were signing the album in (record store) Hmv, she queued up outside in the rain with the fans. I told someone to get my mum in, but she said she didn't want to because she wanted to get the real experience. She likes the real experience of being a fan." Glasvegas frontman James Allan's mum loves celebrating her son's achievements.

Quote: "It's ironic. My girlfriend is always complaining that I am never where I'm supposed to be, when I'm supposed to be. But it's a complete role reversal. We were meant to be meeting in the Starbucks in the arrivals but she went to the wrong one. It's funny." Glasvegas frontman JAMES ALLAN feared he'd be spending his Valentine's Day (14Feb11) alone after his New York-based girlfriend went missing at the airport.

Quote: "I'll tell you what happened there. Me and New York came to an agreement that the world disappeared. And I don't know where it went, it deserted us, man. And the only thing that was left was me and Manhattan." Glasvegas frontman JAMES ALLAN has a cryptic explanation for going missing for nearly a week last month (Oct09).

Quote: "I don't consider myself a singer... I just shout." Glasvegas frontman JAMES ALLAN is not impressed with his own vocal skills.

Quote: "Metallica are a bit like golf. I can't really see the point but some people obviously can, you know?" Scottish band Glasvegas aren't huge fans of rock veterans METALLICA. 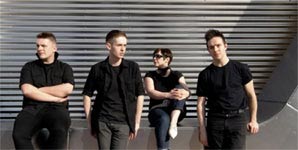