Review of Glasvegas live at the Nottingham Rescue Rooms. 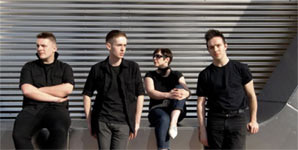 The Glaswegian rockers bring a much anticipated live set to Nottingham, but did they live up to all?

Glasvegas are causing a bit of a stir amongst the music industry, and those music fans in the know. They're still relatively new as a 'major' band, still quite exciting, and far from saturated. The negative side of this for them being that every gig they play is put under scrutiny by all of us. Everyone is interested to see what will happen - will they rise to the top, or will they slip up?

Emerging onto the stage with little fuss, there appeared to be a bit of attitude, but that's quite common with gigs like this so we dismissed it to start with. Straight into 'Flowers and Football Tops', again without too much fuss I had the awful feeling this was going to be a little predictable. Frontman James Allan seemed to be far more interested in thrashing out track after track than engaging with his audience. Having never seen them before I can't say whether this was a one off, or just the way they work. I was informed by someone nearby that they were merely working their way through the album, but have since been told that luckily this was not true.

Musically they sounded ok. They pulled together a tight set. Flooded with light effects, smoke, strobes which were at some times blinding, and a hint to the 50's in fashion style by James. This could have been a good gig. Yet something along the lines of disappointment was brewing amongst the crowd.

Obvious hits such as 'Geraldine' and 'Go Square Go' were welcomed with loud shouts. For a new(ish) band, the ones singing along were the really dedicated fans. Ironically, the track which lingered the longest was a newer, lesser known one. 'Fuck You It's Over' was to be heard en masse, rather like the chants at a football match. It may not have been their best live gig, but they seem to have achieved a status where for most it didn't matter.

Returning to the stage, drinks in hand, 'Daddy's Gone' brought us all back to life and really got the crowd going - a good way to end on a high. So why did part of their return to the stage that night include a slow and slightly depressing track which left at least me a bit deflated and down? We didn't know it, we couldn't really get excited about it. and it wasn't typical Glasvegas to me.

Overall I'm not sure that this was a brilliant example of what the Glaswegian musicians can do. It certainly didn't live up to all of the hype. This is not to say that I wouldn't go again. Speaking to fans afterwards, I know that they can and have done better.

Returning to Nottingham as the headline for the NME 2009 Awards Tour, I'll be interested to see how they do in Rock City. Something tells me that venue is much more them.