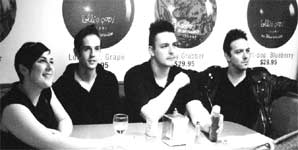 On the back of their Christmas album release and Radio One supported 'Please Come Home' track Glasvegas are playing UK shows through December. In tow are '09 hopefuls and NME Shockwaves tour partners White Lies. 2008 has been a heavyweight year for Glasvegas and having seen them live near the beginning I wanted to see how much progress 200 live shows can make to a bands sound and performance.

Firstly let's talk about White Lies. Most industry heads are tipping this band for big things next year and a bundle of University size shows, to sell out audiences, is surely the perfect end to 2008 for this British cathedral pop band. White Lies have a couple of 'moments' in their set including the glorious single 'death' then it's onto the headliners.

Glasvegas are all about the live show - connecting with their fans, playing through their impassioned songs and encouraging audience singing. James and clan are on good form and yes, a year on the road has made a big difference to the live performance and sound. The set opens, as always, with Flowers and Football tops and progresses with all the live favourites from their debut album. Lonesome Swan, Polmont, Ice Cream Van, Geraldine and My Cheating Heart all sound huge and James' vocals are really strong, clear and tuneful. We get to hear a couple of new tracks off the Christmas album and the stage is adorned with red and green Christmas lights, 'f*ck you it's over' is sonically towering and vicious while Please come Back Home sounds just like the record.

The band encore with a rather evil version of 'Stabbed' with Rab playing the classical piano parts on an utterly distorted, howling guitar then its Daddy's gone with full crowd singing before the band head off home.

All in all this is a fitting end to the year in which Glasvegas laid their musical foundations. The only problem with this show was the venue wasn't big enough. Having played to packed out venues like London's Roundhouse and Brixton Academy to see the show in such a tight room gave a similar sensation to a jumbo jet landing in your back yard.

A second album by the summer, headline slots in larger venues across the NME tour and the summer festival season all on the other side of Christmas must make this unusually meaningful band pleased to look positively into the New Year.