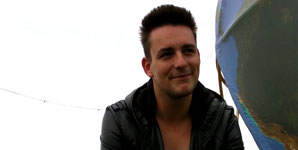 Contactmusic.com caught up with Rab from Glasvegas backstage at Glastonbury festival to talk about their gig on The Other Stage, writing, recording, new songs and life within the band.

CM: It's a big show for you tonight are you nervous?
Rab: Not really. We felt that last year we were pretty shit so the only way is up. We've been doing a lot of gigs recently, so we'll be fine. We're doing a big set today - we're doing some stuff we've not played before I think.

CM: Are you doing any new songs tonight? Anything being played that might make the second album?
Rab: We are not doing any music from the second album but we have been working on it. We're doing a cover tonight we've never played before (Ronettes - Be My baby) just me and James. It's a fairly long set tonight - we'll be doing some Christmas album stuff too. It should be fun. We have been working on new stuff though.

CM: Where are you at with the new album and recording? I spoke to you in February and you told me Rich Costy's on board.
Rab: Well we finish touring in September we have some Kings of Leon stuff over in America then we are taking a month to do all the demos then we'll take it to a studio in America in November and December, finish it in January and mix it in February and it'll be out this time next year. So that's the plan anyway but as you know, things can change. It's getting written it's possibly half done.

CM: Exciting news! You must be walking 10 foot tall at the moment I looked at your tour dates, they are amazing dates! You've got Kings of Leon support on their UK arena tour, U2 at Wembley Stadium, Glastonbury Festival, Leeds Reading, Kings of Leon in America for 12 dates. You are a stadium band within one year, wow!
Rab: We think it's nice that bands like that, Oasis, Kings of Leon and U2 want us there. I guess it's just an indication of James and his song writing. Obviously when you get to that level there's only one reason you are invited onto the line up - it's because the bands like you and appreciate your music. I don't think U2 need us to sell them any tickets for them. So it's more for the love of the music which is good. In terms of "stadium band" I don't know about.

CM: I think U2 have always been exceptional at bringing bands through as their support acts. Down the years, the list is endless. I have one last question for you. Since all this began for you - you've had a long period of intense touring/studio/promo etc what's changed within Glasvegas as a unit or as a family over this hectic time? How have things evolved?
Rab: (Jokingly) what has changed in Glasvegas that's a good question? The main thing that's changed is James has accepted his role in the band. He's the baby because he keeps fucking up. There was a German festival recently where he played four songs and then walked off. We got a bib made for him - it's a baby bib that says "baby" on it and he needs to wear it on a regular basis. That really is the only thing that's changed that he's kind of accepted his role.
(Not joking anymore) We're all closer as a band really, much closer which you can expect when you spend this much time together, especially when we're in America we kind of protect each other from everything else. You leave Britain for a month or two and when you come back everything seems so different, music and everything, so I think that the main thing is as a band we are much closer much more trusting of each other.

CM: Rab, thanks for taking time out in this pretty crazy environment and coming to talk to us. I wish you a good gig tonight, I hope you smash it.