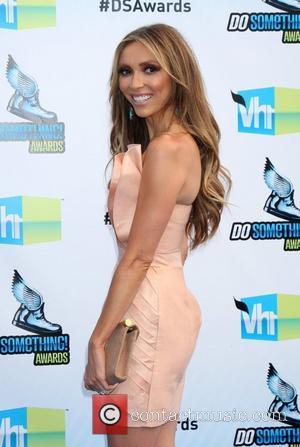 Giuliana Rancic and her husband Bill have finally debuted their bundle of joy, Edward Duke. The tiny tot graces the cover of this week’s Life & Style magazine, and Giuliana says she couldn’t be happier to be on diaper duty!
In the accompanying interview, E! News host Rancic gushed, “I'd never changed more than a diaper or two in my life…Now it's like the littlest things that make me happy — happier than I've ever been.” Bill, 41, added, “It's amazing how maternal instincts have taken over, and Giuliana's just supermom.” Giuliana, 37 and her husband welcomed Edward Duke into the world via surrogate on August 29, 2012, capping a long process for the couple to reach parenthood having undergone several unsuccessful IVF treatments – one of which resulted in a miscarriage. It’s certainly been a tough year for the couple, with Rancic also undergoing a double lumpectomy after suffering a bout of breast cancer late in 2011. However, through all the suffering, the entertainment host says she always had faith that everything would eventually work itself out, saying, “I couldn't believe that all those years of struggling and the tears actually paid off…Every shot, every doctor's visit — in the end, when you're holding your baby in your arms, you forget it all, and it's worth it.”
It looks as though Duke might turn out to be quite the character. After the Life & Style issue appeared on shelves, Rancic tweeted, “LOL!!! I just noticed that little Duke has a "Thumbs Up" in this.”, linking to the cover shot.