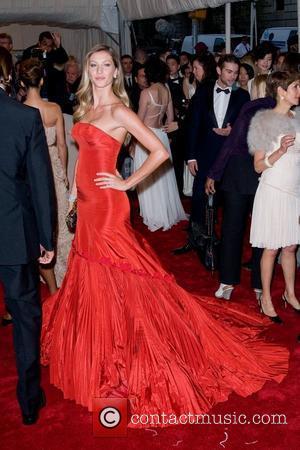 Gisele Bundchen, the 30-year-old Brazilian supermodel, says she is unsure on boyfriend Tom Brady's new hairstyle. Nfl star Brady has been sporting a new long slicked back look recently, which Bundchen says is "his choice", reports People Magazine.
Brady was sporting the new style when he accompanied Bundchen to Monday evening's Met Costume Institute Gala in New York (2nd April 2011). When pushed on what she thought of her beau's new style, the supermodel reacted indifferently, saying, "That's his choice. He does what he wants. I love him no matter what - short, bald, fat. It's all good. It's all good". The New England Patriots star has sported a number of haircuts in recent months, most notably his Justin Bieber-esque shaggy cut that eventually grew into a ponytail. Bundchen married Brady in a small Catholic ceremony in Santa Monica on 26th February 2009. On 5th April of that year, the couple remarried in a larger ceremony in Costa Rica. The couple welcomed their first child in December 2009 and named the boy 'Benjamin Rein Brady'. The supermodel was previously in a relationship with the Hollywood actor Leonardo Dicaprio from 2000 to 2005.
Gisele Bundchen is also a Goodwill Ambassador for the United Nations Environment Programme and is an occasional actress. She has had supporting roles in 'Taxi' and 'The Devil Wears Prada'.