Review of Album Album by Girls 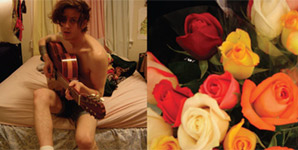 The Blood Brothers meets drunken indie mess vocal of Girls' frontman groans merrily across opener Lust For Life, thankfully not an Iggy cover; instead, a sparsely instrumented Libs party track. There are a lot of bands doing this literally right now (right now!) but I can't think of any who have the same lo-fi style and good feeling behind them as Girls. Plus, they've called their album 'Album', making them probably the hardest band in the world to find on the internet. Try searching 'girls' on Google and see what ranking they are.

The rest of the album plods along quite happily, knowing full well that it's not deep and not clever. It turns Album into quite a revelation- compared with the pretentious self-reference the rest of the genre is, it's taken me all by surprise. When the moments of beauty do arrive, and, they are there, they've caught me unawares, and as far as I'm concerned that's a success. Stirling musicianship as well considering most would expect a few chords and no more.

This is a very likable album- a fun album that is actually fun and not just PR gloss BS.