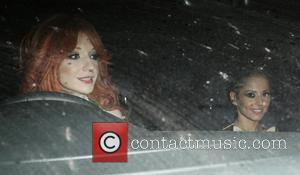 Picture: Girls Aloud band members Nicola Roberts and Cheryl Cole leave the Brighton Centre in Nicola's car, after performing there as part of the groups tour....

Girls Aloud star CHERYL COLE is reportedly pregnant with her first child, according to friends of her soccer star husband ASHLEY. The British BIOLOGY singer wed England ace ASHLEY COLE last July (06), and the couple have been trying for a baby ever since. Now the 23-year-old is said to be three months pregnant. An insider tells newspaper London Lite, "Cheryl and Ashley have been wanting a family for ages now, it would be the seal on their relationship and Ashley's friends have been making it their business to talk about it. It is the talk among Ashley's football gang." A friend of Cheryl's Girls Aloud bandmate Nadine Coyle, who is dating Desperate Housewives hunk Jesse Metcalfe, adds, "We had heard the rumours that Cheryl was pregnant, but when we asked Nadine she refused to confirm or deny it, but merely stood there with a wry smile on her face." Last month (FEB07), Cheryl pulled out of judging upcoming reality TV show BRITAIN'S GOT TALENT alongside Simon Cowell and PIERS MORGAN. She has made just one public appearance since December (06).