Marc Duval is struggling to support his family in France as he is faced with an increased financial pressure. However, he is offered a chance to better his life by moving to the Gibraltar off the Spanish coast and becoming a spy for French customs for a more than reasonable income. Unfortunately, the job is not without its risks as he must go undercover as a trustworthy confidante to formidable cocaine smuggler named Claudio Lanfredi. With this operation comes plenty of temptation into a lifestyle of unmatchable luxury, but when border patrol makes a move to arrest Lanfredi, Marc is forced to hide himself and his family from the wrath of Lanfredi's Columbian drug trafficking associates. It soon becomes clear that Marc has to decide what's worth dying for; his family or his job?

Although this remake of the 1962 classic is beautifully shot and acted, it's so hollow and bleak that it leaves us cold. The topic at hand is the clash between passionate romance and a suitable marriage in a time and place where society told you how to live your life. And while the production design lavishly recreates the period, there's so little hope on display that we feel trapped in a loveless marriage ourselves.

It's 1928, and lifelong buddies Therese and Anne (Tautou and Demoustier) are finally of age, ready to launch themselves into adulthood. Therese has always been promised to Anne's swaggering brother Bernard (Lellouche), and she's excited at the thought of life with him. But nothing prepares her for the harsh, icy reality. Meanwhile, Anne is freer to explore her romantic longing for the poor but sexy fisherman Azevedo (Weber). Of course he's not remotely suitable, so Therese is sent to make Anne see reason. But when she meets Azevedo, she only makes things worse. Meanwhile, her relationship with Bernard takes an even more sinister turn.

Yes, this is a film about a woman trapped in the very life she always dreamed of having, constrained by society from living her own life and forced to take drastic action. But even this doesn't have the results she was expecting, because in this time and place, a woman simply could not control her own destiny. This is an odd kind of film for the usually gregarious Tautou and Lellouche to make, as the grim tone robs them of their usual overpowering charm. Which means that they deliver potent performances as people who are rather pathetic and unlikeable.

By Rich Cline
Excellent
A series of short films and comedy sketches about male infidelity, this French film is often hilariously over-the-top in its farcical excesses. But it's also packed with moments of raw honesty as men grapple with their feelings and their failures.

The film is bookended with the wildly comical adventures of two friends who are serial cheaters: Fred (Dujardin) can separate feelings for his wife and mistresses, while Greg (Lellouche) is racked with guilt because he loves each woman. So they propose a trip to Las Vegas to get it out of their system. In other clips, Laurent (Dujardin) tries to stray while attending a conference away from home, Eric (Lellouche) struggles to cope with the partying lifestyle of his 19-year-old mistress (Ponsot), and Olivier (Dujardin) and his wife (Lamy) push each other to awkward confessions.

Jean Dujardin and Gilles Lellouche play the unfaithful and sexually obsessed men from the romantic country of France in this racy but hilarious French comedy. With the theme of sexual infidelity being the movie's core subject, we see the primal instincts take place in every part of their lives; hotels, sex addiction clinics, glamorous nightclubs in Paris and Sin City itself, Las Vegas. From ridiculous excuses to time honoured tricks, these men will say and do anything to live a sexually absorbed life kept apart from suspicious partners.

Maverick French film director, writer, and producer Luc Besson takes us on another wonderful journey through an imaginary world in his adaptation of 'The Extraordinary Adventures Of Adele Blanc-Sec' a much loved 1970's Franco-Belgian comic adventure written and illustrated by Jacques Tardi.

The setting is Paris, France. The year is 1912. Our protagonist Adele Blanc-Sec is an intrepid young investigative journalist who will go to any lengths to achieve her goal.

For years it's been tradition for Max and his friend to take a yearly holiday at his beach house, this year is set to be no different until one of the group is seriously injured in a car crash. The group of old friends visit the injured Ludo in hospital and decide that they should still go ahead with their trip.

Love Me If You Dare Review

A smash hit in its native France, "Love Me If You Dare" is a precariously bold, dark but light-hearted comedy about a boy and a girl who grow up together challenging each other to more and more outrageous -- and sometimes even dangerous -- dares.

It's a game they play throughout their lives, much to the frustration and chagrin of parents, teachers, co-workers, lovers, spouses, and increasingly, each other. But it's a game so engrained in the personalities and self-identities of intellectual Julien (Guillaume Canet) and precocious Sophie (Marion Cotillard) that neither one is willing to back down and admit what's really going on -- namely that they're in love.

Trading a knocked-about carousel candy tin back and forth as a symbol of each challenge and a trophy of its completion, the game begins as a welcome distraction from trouble in their childhoods (although every dare seems to get them in more trouble). In their teens it becomes an excuse for embarrassments, pranks and sexual provocation, and in adulthood the dares devolve into emotionally dangerous symbols of their envy, disappointment and disapproval.

Continue reading: Love Me If You Dare Review 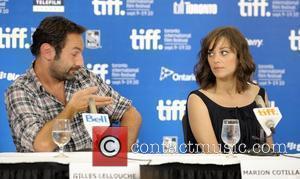 Marc Duval is struggling to support his family in France as he is faced with...

Jean Dujardin and Gilles Lellouche play the unfaithful and sexually obsessed men from the romantic... For years it's been tradition for Max and his friend to take a yearly holiday...

A smash hit in its native France, "Love Me If You Dare" is a precariously...