Geri Halliwell's Daughter Is Embarrassed By Her

Spice Girls singer Geri Halliwell has admitted her six-year-old daughter Bluebell gets embarrassed by her behaviour. 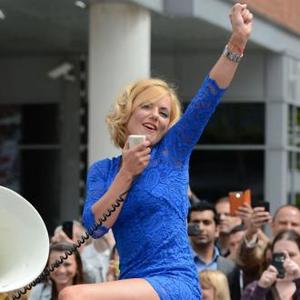 Geri Halliwell's daughter is embarrassed by her.

The Spice Girls star admits her six-year-old child Bluebell Madonna - whose father is her former lover Sacha Gervasi - sometimes feels uncomfortable because of her mother's exuberant personality, but the singer Nevertheless feels ''blessed'' to have such a lovely child.

Geri told the UK edition of HELLO! magazine: ''With my daughter, it's like 'Ab Fab' (TV show 'Absolutely Fabulous') - she's the sensible one. She tells me to stop skipping down the street. She says, 'Mummy, stop it. You're embarrassing me.'

''I know everyone is proud of their child, but she really is lovely and I'm blessed. It's like growing a plant - when it starts to flower you're like, wow! I helped to cultivate that personality.

''I try to allow her to be who she is rather than impose what I think she should be.''

Geri, 40, has been single since splitting from her boyfriend of two-and-a-half years, Henry Beckwith, in March.

Although she misses the intimacy of a relationship, the 'Wannabe' hitmaker believes the right person will come along when she's ready.

''I like that intimacy, it would be wonderful. But I feel OK either way. It's got to be the right person.

''I realize now that when I operate from a place of giving and sharing, rather than taking, I seem to be rewarded in all areas of my life.''