My Chemical Romance star Gerard Way dyed his hair Pink so he wouldn't be grouped in the same category as other rockers in their thirties. 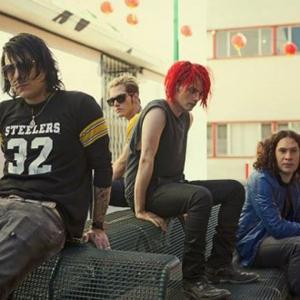 Gerard Way dyed his hair in an act of rebellion against being a rocker in his 30s.

The My Chemical Romance singer has coloured his locks bright Pink ahead of the release of his group's fourth album 'Danger Days: The True Lives of the Fabulous Killjoys', and admits his change of image was a deliberate move to save the group from being categorised with other older musicians.

He said: "I'm happier, but I think in some odd ways more rebellious.

"In some ways the colour is more rebellious, even if it's self-rebellion, there's no big, secret, hidden enemy.

"We're in our 30s and we're in a rock band and you see things start to happen with bands at that period of life. I think it was a rebellion against that, against being brought into that whole modern rock thing."

The 33-year-old star also admitted the group's introduction of more colour in their wardrobe away from the blacks which dominated their look around their last album 'The Black Parade' was a gradual move.

He explained: "Every week someone would show up with something new that was colour, like, 'Oh I got these sneakers that are in colour,' and it kind of crept in almost like a virus into our lives.

"And then we had normal-looking wardrobes after a while."

'Danger Days: The True Lives of the Fabulous Killjoys' is released on November 22.