Gerard Butler says animators observed his actions when he lent his voice to How to Train Your Dragon 2's Stoick the Vast and incorporated it into the movie. 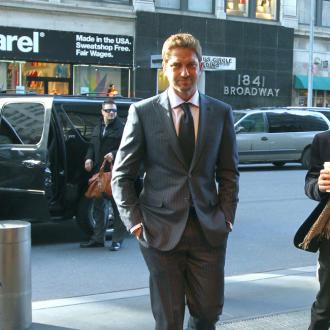 Gerard Butler sees himself in his in his 'How to Train Your Dragon 2' character.

The 44-year-old actor revealed the animators observed his actions whilst he lent his voice to the chieftain of the Viking tribe, Stoick the Vast, and incorporated it into the movie.

Talking on US chat show, 'Late Night with Seth Meyers', he said: ''They put cameras all over the room when you're doing it and then they animate a lot of the parts with how you move and how you move your face.

''I've seen some examples of me doing this thing and in the movie it was exact same. Then you realise its pretty cool, and there was a lot of your mannerisms. I don't look like Stoick but I see in the parts where he's being idiotic and lost ... I know those eyebrows.''

Bulter loved making an animation and seeing it come together at the end.

He added: ''It's good fun making an animated movie. Especially when you do your thing, your voice, then you let it go. It took a while, it was three years in the making, then I'm like an audience member and I turn up and I'm blown away. It's such a beautiful exhilarating experience.''