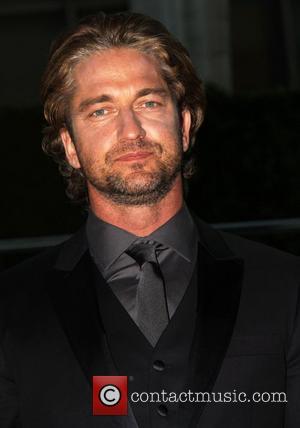 Gerard Butler, the Scottish-born Hollywood star best known for his role as King Leonidas in '300', pulled on the Celtic shirt to face Manchester United on Tuesday evening (9th August 2011). The actor stole the show in a 'legends' charity match at the Parkhead stadium in Glasgow, reports the UK's Metro newspaper.
Butler, who has starred number of huge action movies including 'Beowulf', was predictably energetic in an entertaining match that finished 5-2 to the Scottish side. The actor also got to play alongside the Celtic legend Henrik Larrson, who marked his return to the city with a hat-trick. Despite failing to score, Gerard was greeted by a standing ovation when he was eventually substituted. The Manchester United line-up featured past stars Roy Keane, Dwight York and Teddy Sheringham, who were joined by The Verve front-man Richard Ashcroft and British rapper Tinchy Strider.
Butler, a keen sportsman and football fanatic, recently completed filming the upcoming comedy-drama 'Playing the Field', about a former professional athlete who begins to coach his son's soccer team. However, he finds himself being unable to resist getting close to the players mothers. The film also stars Jessica Biel and DENNIS QUAID.