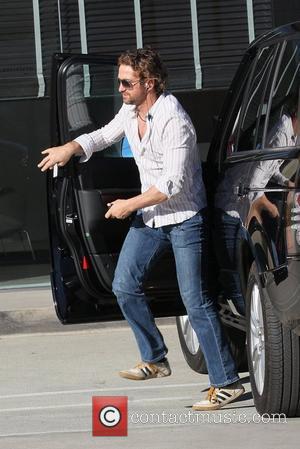 Gerard Butler once caused an airport security scare after officials flagged up special shoes he had worn for his Tomb Raider audition.
The Scottish actor was stopped by security guards who were suspicious of the boots he wore when he tried out for his role alongside Angelina Jolie in the 2003 blockbuster Lara Croft Tomb Raider: The Cradle of Life.
He tells Shortlist magazine, "Just after the shoe bomber plot in 2001, I flew to London from Montreal to do a screen test for Lara Croft. They'd built this caged floor for the set but they couldn't hear my dialogue properly so they put felt on my boots.
"Straight after the audition I went back to the airport and as I walked through they went, 'OK, sir, show us your feet.' And then I remembered I had this roughly cut, half inch of felt stuck to the bottom of my soles."
Butler admits he struggled to explain why he had material taped to his shoes, adding, "The guy literally went, 'What the f**k is that? Security!' The next thing I know there are 10 people around me and I'm telling what sounds like the most far-fetched story ever about my audition with Angelina Jolie."