Gerard Butler was ''blown away'' by down-to-earth Michelle Monaghan when they worked together on 'Machine Gun Preacher'. 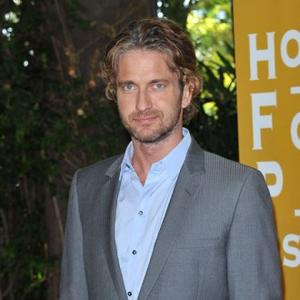 Gerard Butler was "blown away" working with Michelle Monaghan.

The pair star together in new movie 'Machine Gun Preacher' and the actor was impressed by his co-star's beauty and down-to-earth attitude.

He said: "Michelle is incredibly cool and incredibly fun. She is one of those girls who is as comfortable with the electricians, the key grip, the cameraman, anybody in the crew, catering as she is with her makeup crew or me or the director.

"We all get the same treatment, and fun and smart and self deprecating and then surprisingly irreverent. So, I was really blown away to get a girl who has that beauty and yet has so much more to give in terms of personality."

Michele stars in the film - which is based on a true story - as Lynn, the wife of biker, preacher and protector of orphans Sam, and Gerard thinks her attitude transformed the character.

He told Ain't It Cool News: "It was the hardest role that we had when we were working on The Script, trying to make Lynn not sound like just a kind of whiney drowning person. It's not like Lynn is like that as a person--the actual Lynn--it's just because Sam is always forging ahead very much without the consent of his family and doing things that any wife would have problems with, it was, 'How do you bring Lynn out of that hole of just being a woman who has issues all of the time with what her husband is doing?'

"Then you bring in Michelle, and she gave you all of those qualities together with an encouragement, a compassion for Sam and a compassion for his work and a sexiness and a sassiness, which is something that we never had with Lynn. And suddenly Michelle arrives and you go 'Oh, there you go.' Because we needed to be reminded of the fun that these guys had. "