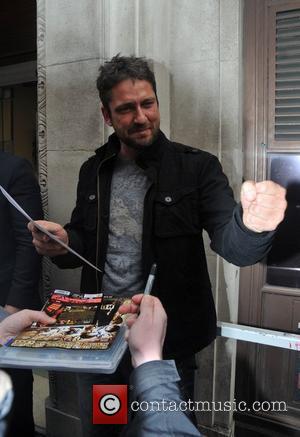 Actor Gerard Butler only learned he had a deformed ear when he had to shave his head for his role opposite Angelina Jolie in the Tomb Raider sequel.
The Scot reveals ear surgery when he was a child left him with a mangled ear - but he wasn't aware how lopsided his head looked until he got into character for the 2003 film.
He tells the upcoming issue of Men's Journal magazine he was born with "sticking-out ears", but his right one was pressed back in following surgery to save his hearing following a bout of tinnitus.
Butler says, "I didn't realise it until I had to shave my head for that movie (Tomb Raider: The Cradle of Life). Everyone went, 'Holy f**k, one ear sticks out way more than the other one!' And we literally had to glue it back."
The Scot's hearing problems are also to blame for his "crooked smile".
Butler, who still suffers from tinnitus and is hard of hearing in his right ear, explains, "I know a couple of other people with crooked smiles, and it turns out they're hard of hearing in one ear.
"When I was younger, I looked like I had a stroke."