GEORGE STRAIT was named Entertainer of the Year at last night's Country Music Awards (CMAs) 2013, while Blake Shelton took home awards for Male Vocalist of the Year and Album of the Year. 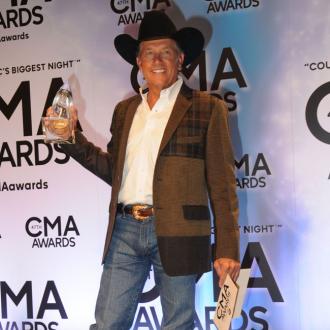 The country legend was honoured with the top award for the third time in his career, after previously taking it home in 1989 and 1990.

Accepting his trophy, he said: ''What? Oh my gosh, never in a million years. This blows me away, I cannot believe it ... This means the world to me, I appreciate it.''

However, this is likely the last time George - who released his 27th studio album earlier this year - will accept the accolade, as he has announced plans to retire next year.

Blake Shelton was also nominated for Entertainer of the Year, but was pleased he lost out to George.

He said: ''That's how it needs to be because he's not just entertainer of the year, he's entertainer of the last three decades, I guess, or four decades. I don't know who's keeping score. I mean, it's George Strait. He's King George. I couldn't be happier with how this turned out.''

However, Blake didn't go home empty handed as he won two of the other biggest awards, Male Vocalist of the Year and Album of the Year for 'Based on a True Story', released earlier this year.

Ahead of the show held at the Bridgestone Arena in Nashville, Tennessee, last night, Taylor Swift found out she had won three in three categories, including receiving the much coveted Pinnacle Award, a special prize which has only previously been given to Garth Brooks.

Newcomer Kasey Musgraves also triumphed, as she was named New Artist of the Year.

Entertainer of the Year: George Strait

Musician of the Year: Mac McAnally

Album of the Year: Blake Shelton - Based on a True Story

George Strait To Close Out Final Tour In Dallas

George Strait Mourning The Death Of His Dad At 91

George Strait To Be Honoured With Career Achievement Award

George Strait Is A Grandfather