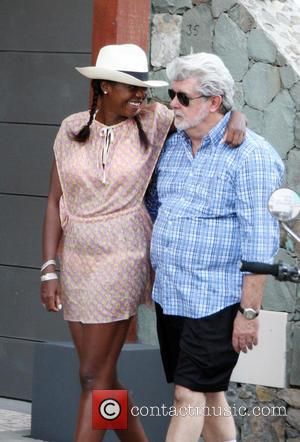 Picture: GEORGE LUCAS WELCOMES A DAUGHTER VIA SURROGATE - REPORT STAR WARS creator GEORGE LUCAS has become a new dad at the age of 69 after...

Filmmaker George Lucas and his wife Mellody Hobson have donated $25 million (£15.6 million) to a private school in Chicago, Illinois through their organisation The George Lucas Family Foundation.

The grant will be used to build a new arts hall at the university's Laboratory Schools, which will be named after musician and photographer Gordon Parks.

A statement from the Star Wars director reads: "We believe in the power of art to transform lives and communities. Gordon Parks' work did just that."

Hobson adds, "It was important to us that the University of Chicago campus have a building named for an African American, given the diverse community in which it sits, and the outstanding contributions to our society by people of color."

This isn't the first donation they have made to a Chicago-area education institution - they have also pledged $25 million to education charity After School Matters.