The film and music icons will have their latest award reception broadcast live on Tuesday.

George Lucas might've have handed over the reins of 'Star Wars' to JJ Abrams, but his input into that world has certainly not been forgotten. Alongside songwriter Carole King, he was honored for the 38th Annual Kennedy Center Honors earlier this year, with the gala set to be aired next week.

George Lucas and Carole King among this year's honorees

Lucas remains modest about his work as a director, and has admitted his mixed feelings about relinquishing his beloved franchise. He's expressed relief that he no longer has to experience the sort of harsh criticism that he did with the Jar Jar Binks fiasco, but also that he felt like a divorced father going to his grown-up child's wedding ahead of the premiere.

'A director is just somebody who's got a fetish with making the world to be what he wants it to be. Sort of narcissistic', he jokingly explained on CBS This Morning. 'All directors are vaguely like emperors, which is, 'I want to build the society to reflect me and what I want.''

Lucas is also known for directing 1973's 'American Graffiti' and was responsible for writing the stories and characters for the 'Indiana Jones' franchise. 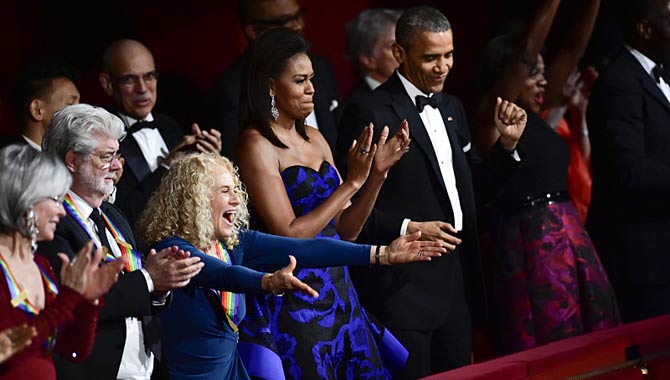 Obama was present to congratulate the honorees

Meanwhile, Carole King - who is best known for her Grammy winning 1971 album 'Tapestry' and for writing several stars' smash hits including James Taylor's 'You've Got A Friend' - was also awarded at the 2015 Kennedy Center Honors where President Of The United States Barack Obama and First Lady Michelle Obama were there to celebrate with them.

The 38th Annual Kennedy Center Honors will air on CBS on December 29th 2015.