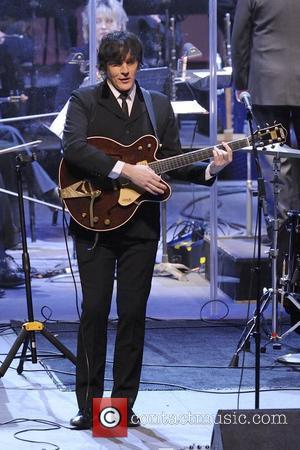 Picture: John Brosnan, as George Harrison, performs on stage during the 'Classical Mystery Tour', a note-for-note live reincarnation of The Beatles at the Sony Centre...

George Harrison's widow Olivia has ruled out ever reviving the Beatles legend's image with an onstage hologram, insisting she wouldn't be able to "handle" seeing it.
Last month (Apr12) the audience at the Coachella festival in California was left stunned when Snoop Dogg and Dr. Dre 'performed' with a ghostly image of their late rap pal Tupac Shakur.
The headline-grabbing performance sparked much debate about the possibilities of bringing back other dead music legends - but Fab Four star Harrison's wife has ruled out the chance of a Beatles reunion.
She tells Mojo magazine, "No, I don't think I could handle that. I think that would be unkind and unfair to him too. He needs to be where he is, y'know (sic) - I'm sure he's occupied."