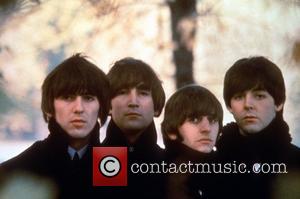 Picture: The Beatles (1964) From left: George Harrison, John Lennon, Ringo Starr, Paul McCartney This is a PR photo. WENN does not claim any Copyright or...

Guitars, clothing and lyrics from George Harrison's collection are to be exhibited in Los Angeles to coincide with the release of Martin Scorsese's new film about the late Beatle.
The Grammy Museum in Los Angeles will mount a major exhibition on the life and music of Harrison next month (Oct11), titled George Harrison: Living in the Material World - which is also the name of Scorsese's film.
The museum is working closely with Harrison’s widow, Olivia Harrison and his son Dhani, in putting together what is being described as the first major look at Harrison, according to the Los Angeles Times.
The exhibition, which opens on 11 October (11), features memorabilia from Harrison's years with the Beatles, his solo career and the time he spent as a member of supergroup the Traveling Wilburys.
The show will also feature never-before-seen photographs taken by Harrison.