A New Planning Dispute Is Brewing In The English Village Where George Clooney Is Setting Up Home Over A Statue Donated By Entertainer Uri Geller. 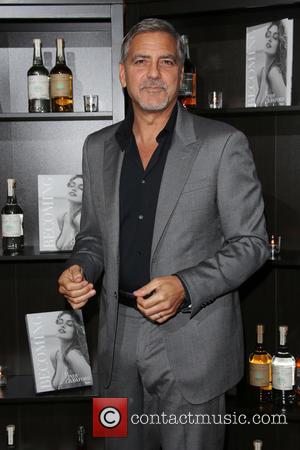 On Monday (05Oct15), Uri unveiled a sculpture of a bent red spoon by artist Paul Wells next to a path which runs past the mansion George shares with his wife Amal in Sonning, England.

However, Uri's statue has sparked a storm of controversy as council officials have declared the star failed to obtain the proper authorisation.

"The statue needs planning permission to be erected, and we haven't yet received a planning application for it. So we will be writing to him, inviting him to submit an application as soon as possible," declares Councillor John Kaiser, who oversees planning decisions for Wokingham Borough Council.

Uri, who is leaving the village after 35 years to return to his native Israel, donated the statue to remind residents of his time there, and insists he does not want to see the monument taken down.

"My understanding is that all the proper permission was granted," he says in a statement. "I had spoken to the past president of the Parish Council who assured me that it was fine.

"This is a totally one of a kind piece of art which has been created for the village of Sonning on Thames, it would seem to me to be a great shame if the red spoon should be removed due to red tape.

"And if the council do decide the statue must be removed for planning reasons, my message to them is: 'You can take my spoon, but you'll never bend my creative freedom!'"

George, whose $16 million (£10 million) mansion sits across the river from the path where the statue is situated, has suffered his own planning difficulties relating to renovations at his new home.

The Ocean's Eleven star had to alter plans to install surveillance cameras around the grounds of his estate and has been ordered by officials at South Oxfordshire District Council to move a fence which sits between the house and the river.