George Clooney urged to have kids

George Clooney's new father-in-law used his wedding speech to urge the actor and his bride Amal Alamuddin to have children. 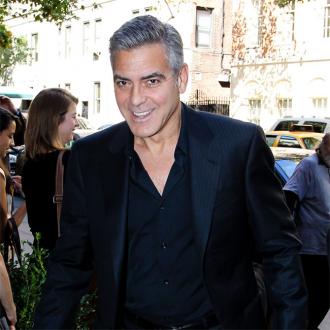 George Clooney's new father-in-law has urged him to have children.

The 53-year-old actor married British lawyer Amal Alamuddin in Venice, Italy, on Saturday (27.09.14) and the 36-year-old beauty's dad Ramzi Alamuddin wasted no time in urging the couple to start a family.

According to a guest at the Aman Canal Grande Hotel, Ramzi used his speech to say: ''Now it's time for grandchildren!''

During the speeches, messages were read aloud to the couple from absent friends including Dan Aykroyd and Sandra Bullock.

George and Amal exchanged vows they had written themselves under an arch of imported white roses shortly after 8pm, and were pronounced husband and wife just 18 minutes later.

A source told Us Weekly magazine: ''Clooney held Amal's hand when saying part of his vows.''

Following the ceremony, the newlyweds and guests including Cindy Crawford, Matt Damon and Emily Blunt tucked into a five-course feast including lobster, risotto, sea bass, and beef and were entertained by a small string orchestra.

After dinner, a jazz trio and pianist performed and were a particular hit with guest Bill Murray.

The source said: ''He loved the music and put his thumbs up when it started.''

While many guests continued partying until 5am, there was list rest to be had as the celebrations continued yesterday (28.09.14).

The 'Oceans 12' star and his wife hosted a champagne lunch at Cipriani for family and friends, which was described as ''super chilled without anyone over doing it.''

Later in the day, the couple enjoyed the ''main event'' of a dinner party on the other side of the Belmond Hotel Cipriani at the Granaries of the Venetian Republic room.

According to E! News, staff had spent the day setting up the area with palm trees, lighting and speakers for Parade, a French cover band.

The couple will complete their weekend of festivities with a small civil ceremony today (29.09.14) that will legalise their union.