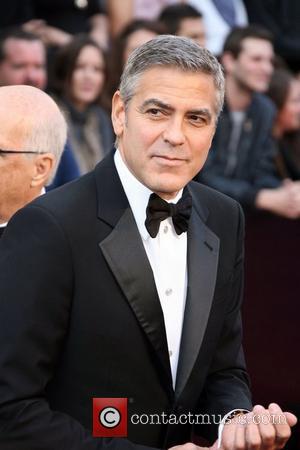 George Clooney and his girlfriend Stacy Keibler both got food poisoning after a dodgy meal in their beloved Italy. The couple, who holiday regularly at Clooney's Lake Como home, fell ill after a meal in Cernobbio though the manager of the restaurant in question denies all responsibility.
According to Tmz.com, the famous pair were dining with pals at a traditional Italian restaurant when they began feeling queasy afterwards. Keibler tweeted, "Finally had a bad meal in Italy.Our whole dinner party got food poisoning ohwell at least I'm still in Italy". Despite the poisoning, things appear to be running smoothly for the couple, who have been enjoying their vacation in Lake Como since touching down at Clooney's pad last month. Highlights of the romantic getaway have reportedly included boat rides, a motorcycle excursion and spa day for the actor's dog Einstein. A source told Tmz.com that both Clooney and ex-wrestler Keibler are now feeling fine after their brief bout of food poisoning. However, the manager of the restaurant is refusing to accept that it was his food that left the table with upset tummies, claiming they must have gotten food poisoning elsewhere.
Following his career-best role in 2011's 'The Descendants', Clooney is taking a well-earned break from Hollywood. He recently finished filming the sci-fi thriller 'Gravity', though the film won't hit cinemas until 2013.