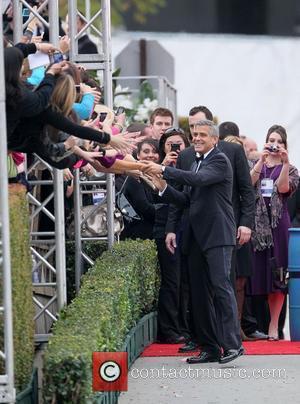 George Clooney has started out 2012 clean and sober after opting to temporarily give up booze.
The movie star insists he has no intention of becoming a teetotaler and giving up alcohol for good - but he thought it would be a healthy boost to be dry for a few months.
Admitting he didn't have his lucky flask with him at the Golden Globes in Los Angeles last night, Clooney, who still took home the night's Best Actor award, revealed, "I've made a little New Year's deal that I wouldn't drink for a while... I'm giving my liver a chance to catch back up."
But one U.S. TV host didn't get the memo - Extra's Mario Lopez presented Clooney with a new flask filled with his tipple of choice, vodka.