Clooney has followed up his visit to the Social Bite cafe in Edinburgh last month by helping to launch a new Christmas campaign to feed homeless people in Scotland.

Hollywood heavyweight George Clooney has launched a new fundraising campaign with the aim of feeding thousands of homeless people in Scotland on Christmas Day.

The 54 year old star grabbed headlines in November when he paid a visit to the Edinburgh sandwich shop Social Bite, a non-profit organisation that gives proceeds to charity, allows patrons to buy food for homeless people and is staffed partly with people who were once homeless themselves.

At that point, Clooney recorded a video message pledging the first £5 towards the campaign, in addition to the $1000 he left at the shop following his flying visit to the country. 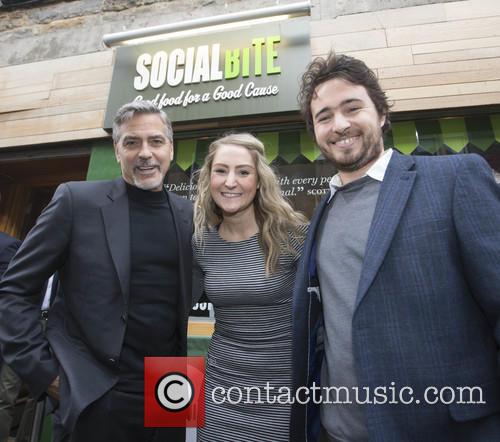 A page has been set up on itison.com, and donators can give £5 either to the Christmas fund, or the same amount to a convoy of vans from the company who will depart on Boxing Day, headed for refugee camps in Calais, the Serb / Croat border and Lesbos in Greece loaded up with food and clothing essentials for winter.

Josh Littlejohn, co-founder of Social Bite, said: “Last year we asked the public to pay £5 to allow us to open on Christmas Day and give local homeless people a place to go for a good meal. Our target was to provide 800 meals. We were amazed by the response and received over 36,000 donations from all over the world meaning we not only fed folk at Christmas, we were able to feed them all year round in all five of our shops.”

About the trip to the refugee camps to help alleviate the suffering of migrants, Littlejohn said: “Our trip is about reaching out a hand of compassion, and letting them know Scotland cares. We don't know how many vans we'll fill but we'll take as many as we can with the donations we get.”

“We've had amazing support from the outdoor clothing brand Trespass, who have agreed to match each donation we receive with hats, gloves, coats and tents to help combat the sub-zero temperatures the refugees will have to endure in the winter months.”