George Clooney has joked that he ''doesn't like the young ones'', after starring in 'Tomorrowland' with Britt Robertson, 25, and Raffey Cassidy, 13. 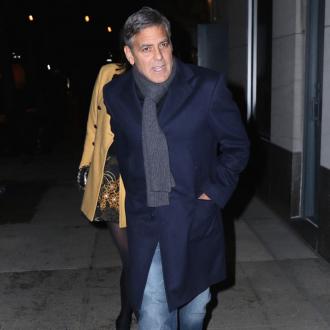 The 54-year-old actor has joked that he ''doesn't like the young ones'', after starring in 'Tomorrowland' with Britt Robertson, 25, and Raffey Cassidy, 13.

George said: ''I don't like the young ones. I don't care for them. No, Raffey's fantastic, and Britt's an amazing actress, so it was a lot of fun.''

The 'Ocean's Eleven' star went on reveal that the main reason he wanted to star in 'Tomorrowland' was to work with its director Brad Bird, and described the sci-fi film - which sees a teen and a former boy-genius inventor embark on a mission to discover a place that exists in their collective memory - as an ''upbeat end-of-the-world film''.

Speaking to the MailOnline, George said: ''I wanted to work with Brad Bird. He's a great guy, a wonderful talent. I loved the idea and the themes of the movie. I thought it was original, so I wanted to do it.

''It is upbeat. I do like an upbeat end-of-the-world film, you don't get those all that often.''

George went on to reveal that he just finished shooting 'Hail, Caesar!' with the Coen Brothers, and described it as a ''career-ender''.

He said: ''I just finished a movie with the Coen Brothers, so we could be in trouble. It could be a career-ender. No, I love those guys and Jodie Foster directed it, so we're having a fun time.''