Clooney was interviewed at Toronto International Film Festival about how he's coping with being a dad to twins.

George Clooney has revealed that being a new father to his twins is taking it out of him, and that the babies cry less than he does!

“They don’t cry,” he told MailOnline while appearing at the Toronto Film Festival on Wednesday night (September 13th). “I cry more than they do. I cry four times a day right now, because I’m so tired.”

He added: ‘Hey, remember back when you were single, before you didn’t have to worry about keeping people alive?” 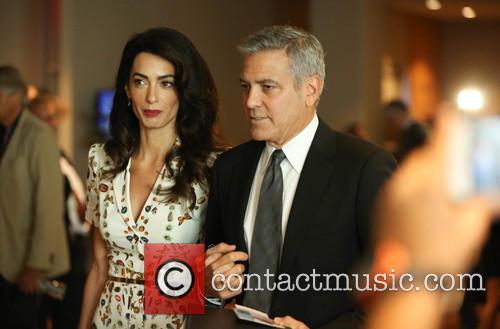 George and Amal Clooney are coping with new parenthood

Clooney was joking, of course, and said that he’d much rather be at home with the family than at TIFF.

“The surprise for me was how much more complicated twins is than just the one — it’s not just twice as much work, it’s more than that. And it’s not even so much work for me, because these two knuckleheads don’t even care that I exist right now! All they want to do is eat, so I have nothing to give them except a bottle once in a while, and they’re happy about that, but it’s mostly Amal for them at the moment,” he continued. “I don’t even really understand what’s going on!”

“And I have such admiration for my wife because she’s breastfeeding them and getting about two hours of sleep per interval, and the love they have for her is a sight to see and it’s beautiful.”

Clooney, who for years and years had been the subject of tabloid speculation about his relationship status when he was still single, admitted that he didn’t think parenthood would ever happen for him. “Look, I’m 56 years old and I didn’t think it was going to happen for me. I thought my life would be focused on my career, not relationships, and I’d sort of accepted that.”