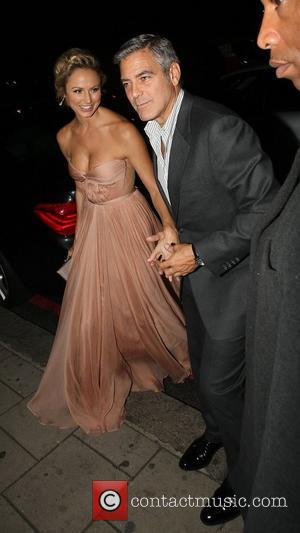 George Clooney had a 'more of a father-daughter relationship' with his ex-girlfriend Elisabetta Canalis, according to the Italian starlet herself. In Italian Journalist Bruno Vespa's new book 'Questo Amore (This Love)', Elisabetta Canalis admits that she 'was unable to clarify [this issue].until now', months after her split with George Clooney.
People reports that the Italian 'Dancing With The Stars' contestant elaborated that Clooney was "the person who valued my feminine side the most" and "one of the best people I have met from a charitable point of view" To clarify, she stated: "he has been special for me, and very important, just as a father would be". The couple split up in June and now Canalis denies that marriage was the issue that caused her to sever ties with the 50-year-old Oscar winner: "George and I never spoke of marriage nor of having kids..I don't put limits to the possibility of having them, but neither George nor I had ever envisaged having kids together. The end of the relationship was not caused by a marriage issue, but instead by our personal needs". She finished off summarising: "George is a real gentleman, even in his private life. I was very much respected both as a woman and partner."
George Clooney will star alongside fellow Oscar winner Sandra Bullock in the sci-fi drama 'Gravity' next year. He is currently across UK cinema screens in political thriller 'The Ides of March'. Elisabetta Canalis became the second candidate to be eliminated on the US dancing hit-show.